So, you want to buy and install Euro Ford Sierra Mk1 Lucas/Cibie headlights in your Merkur XR4Ti

Soon after buying my first XR4Ti (in the header picture of this blog), I noticed how good the European headlights looked on Ford Sierras, and, when properly fitted, how great they look on the XR4Ti. Here's an example found on the Internet. Based on this, I started my investigation into what it would take to obtain and install them. 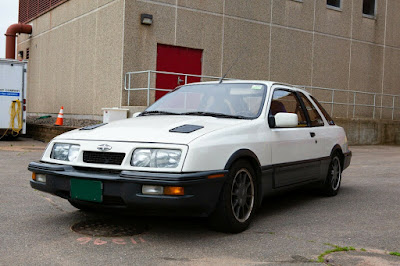 First, the differences between XR4Ti and Sierra headlights

The Merkur XR4Ti had adequate headlights when this 30+ year old car was new, using classic incandescent bulbs with deep reflectors to throw light ahead of the car. The XR4Ti also had fairly useless, separate, inboard light pods that were turned on with the parking lights, serving as sort of daytime running lights, given that concept was just getting legs in the late 80s when these cars came out. 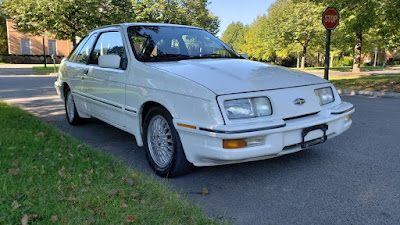 The XR4Ti's European cousin, the Ford Sierra, received large, one-piece headlight/driving light units, with glass faces. Not all Sierra headlights are created equal however, which I'll get to in a minute. 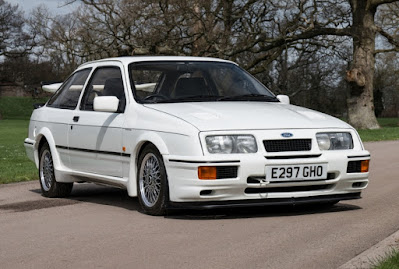 Second, what I learned from looking at two sets of Euro lights

There are two manufacturers of Ford Sierra headlights: Lucas and Cibie.
I have one pair of Cibie housings that came already fitted on a car I bought, and I have one pair of Lucas housings that I bought separately, with the intention of installing them on my original XR4Ti.
Here's what I think are the differences, based on looking at two separate sets of lights.

Third: Wiring for the XR4Ti, for LEDs

The XR4Ti has two relevant sets of wires on each side of the car, to run the forward-facing lights you use to drive.

1) headlights - XR4Ti uses a 3 wire socket to hold the main hi/lo bulb. Mine were yellow, white and brown (ground).

The XR4Ti wiring and headlight switch worked well enough for the stock lighting, with one high/low bulb. Average bulbs, average lighting for the 80s. They didn't plan, however, for this wiring and the headlight stalk to run more than one high wattage bulb, common in the Euro headlights.

Looking at the other articles (here and here), they were written 10-15 years ago. They all reference using power directly from the battery, and using the factory headlight wiring to run relays, allowing you to drive the most power directly to the lights. In 202x, we can benefit from low power, high brightness LED bulbs in every shape and form factor.

So...you don’t need relays and extra wiring to run LEDs. If you still have the super helpful factory “convenience computer”, you may need to wire in resistors to keep the computer and the display happy.