Since I have a gauge cluster with a MerkMeter and needed to understand what it was, how it worked and how to reinstall it, I had to go find information about it. I finally found information and had to pull this out of the WayBack Machine, I figured I'd post it here, so there's a live website for this content again.

Rationale
The exhaust gas oxygen (EGO) sensor is a crucial part of the engine management strategies of virtually all modern cars.  It basically enables the Engine Control Unit (ECU) to properly manage the fuel flow in response to changing engine operating conditions.  Responding to these changing conditions rapidly and accurately is a key component of the operating strategies employed by the software embedded in the ECU.  An improperly operating EGO can result in poor fuel economy, higher emissions, and poor drivability and performance.  Also, insight into the data a properly functioning oxygen sensor is sending to the ECU can be invaluable in monitoring the runtime health of the engine and diagnosing trouble when it occurs.  Just as a hot running engine, as indicated by the coolant temperature gauge in the instrument cluster, can be an indicator of serious problems, so too can an abnormal air/fuel ratio as indicated by the proper gauge.

For this type of EGO sensor to work, it must be heated above 600° F.  The exhaust gases passing over the sensor tip in the exhaust pipe accomplish this heating.  It generally takes about 2 minutes with the engine running above 2000 rpm for the EGO in an XR4Ti to be brought up to operating temperature. The Scorpio uses a Heated Exhaust Gas Oxygen (HEGO).  The HEGO, as the name implies, is brought up to operating temperature somewhat quicker due to an internal electrical heating element.  Output from both types of sensors is comparable.

A new EGO sensor will output from zero to about one volt and can detect changes in the oxygen content of the exhaust very quickly.  These sensors are particularly sensitive around the ideal air/fuel mixture of about 14.7:1, which results in stoichiometric burn.  This is the ratio at which there is theoretically just enough oxygen to burn all the fuel.  (In practice the burn is never completely efficient and some residual oxygen will always be present in the exhaust).  The stock Bosch EGO sensors (or equivalents) generate approximately 0.45 volt at this mixture.  A voltage below 0.45 indicates a lean condition, while a voltage above 0.45 volt indicates rich.

How does the EGO output voltage correspond to an air/fuel ratio value?  The answer to this question is dependent on many variables; the age and condition of the EGO, the fuel used, the operating temperature of the EGO among them.  Representative data from Bosch is shown below for a new zirconium dioxide EGO operating at 800-1200°F with an engine burning gasoline containing no alcohol:

As a sensor gets older the maximum voltage it can generate and its sensitivity to changes may decrease.  Also if the sensor becomes contaminated with lead, silicone, or antifreeze residue it may become very inaccurate.  Bosch recommends that unheated oxygen sensors (XR4Ti) be replaced every 30,000-50,000 miles.  First generation heated sensors (Scorpio) should be replaced every 60,000 miles.

The sensitivity and responsiveness of the EGO makes it possible for the ECU to dynamically adjust the air/fuel ratio. When the engine has warmed, as indicated by the Engine Coolant Temperature (ECT) sensor, the ECU will go into “Closed Loop Mode”.  This is a feedback mode in which the ECU will actively vary the fuel supplied via the injectors based upon the EGO signal.  When a lean condition is indicated by the EGO, the ECU will increase the amount of fuel supplied by the injectors.  If the EGO shows the mixture is rich, the ECU will reduce the fuel supplied.  The ECU will make the necessary calculations and dynamically adjust the mixture continuously while in Closed-Loop Mode as much as several times a second.

MerkMeter Behavior
The MerkMeter is essentially just a small voltmeter calibrated to a range of zero to one volt.  Each LED indicates an increment of 0.1 volt.  The leftmost red LED will light when the voltage from the EGO is about 0.1 volt.  The leftmost yellow LED lights at about 0.4 volt and the leftmost green LED lights at about 0.7 volt.  The rightmost red LED will light at or above 1.0 volt.  There is about 10 millivolts overlap between adjacent LEDs.  For example, a value of 0.69 volts will light both the rightmost yellow LED as well as the leftmost green LED.
What the MerkMeter displays depends upon the operating conditions of the engine:

Cold Engine
When the engine is cold, the MerkMeter will gradually display an increasing voltage as the EGO sensor warms to operating temperature.
Closed-Loop Mode
The MerkMeter will show this mode as a display that oscillates from about 0.1 volts to 0.8 volts and back again. When at idle the crossover time from lean to rich and back to lean might be about one second. At part throttle cruise, the crossovers might occur several times a second. The range and speed of these Closed-Loop oscillations can be an indicator of the health of the EGO. If the range of oscillations is considerably less than normal, or is skewed toward one end of the range or the other, oxygen sensor deterioration or contamination might be indicated. The same condition could cause the crossover rate to slow. A car that never goes into Closed Loop Mode might have some other faulty sensor or ignition circuit. The XR4Ti will operate in Closed-Loop Mode only below 2950 rpm.
Open-Loop Mode
In this mode, the ECU does not use the EGO signal to calculate how much fuel to supply. It instead supplies a fixed amount of fuel based upon other parameters. The MerkMeter will display a stable, slightly rich reading normally in the 0.7 to 0.9 volt range. This will most often occur when cruising above 2950 rpm (XR4Ti PF2/PF3 calibration).
Wide-Open Throttle
At Wide Open Throttle (WOT) the ECU will also go into Open-Loop Mode. The MerkMeter will normally display a steady rich reading in the 0.7 to 0.9 range for the duration of the WOT event. If the MerkMeter drops into the 0.1-0.3 volt range at WOT, it is a good indication that insufficient fuel is being supplied to meet the engine demands.

So, you want to buy and install Ford Sierra Mk1 Lucas/Cibie headlights in your Merkur XR4Ti

Soon after buying my first XR4Ti (in the header picture of this blog), I noticed how good the European headlights looked on Ford Sierras, an... 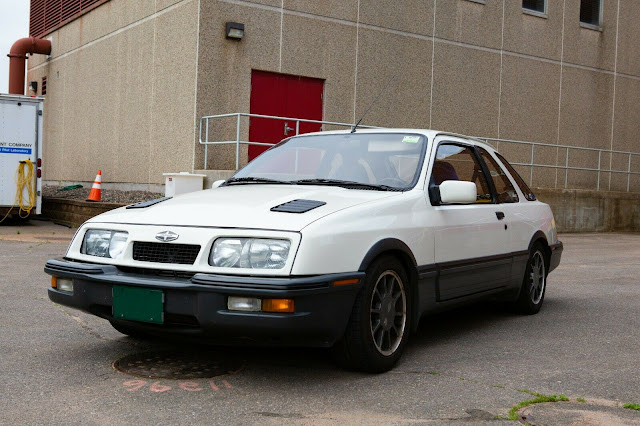